Emotions as the Impetus of Negative Campaigning Effects.
Investigating the mediating role of anger and fear in the effects of negative campaigning.

So far, research on negative campaigning has produced inconsistent findings as to its effects on voter turnout and voter intention (Lau et al., 2007; Haselmayer, 2019). It has been suggested that these inconsistencies stem in part from the fact that citizens evaluate campaigns ads on multiple criteria such as the relevance of the ad, its truthfulness, informativeness, etc. (e.g. Brooks & Geer, 2007; Mattes & Redlawsk, 2014). As such, evaluating the impact of negative campaigning based purely on the intrinsic qualities of the campaign messages might become troublesome. Addressing this issue, I examined whether the effects of campaign negativity on voter turnout and voting intention are mediated by and better understood through the emotions experienced by the voters in reaction to said campaigns. Negative information, including political messages, has been consistently shown to elicit strong psychophysiological responses, resulting in higher cognitive processing and stronger emotional reactions than neutral or positively-valanced information (e.g. Ito et al, 1998; Namkoong, Fung, & Scheufele, 2012). Such increased emotional reactions are notable as it has been demonstrated that emotional states of voters influence their political decisions (e.g. Marcus et al., 2000, Brader, 2005, Valentino et al., 2011). In fact, there is an argument to be made that it is the emotions citizens experience when confronted with campaign ads that determine what effects the ads have on them (Marcus et al., 2000). Consequently, to better understand how negative campaigning affects the voter, it is worth entertaining the possibility of the effects of negative campaigning being mediated by the emotions it elicits in the electorate. Within the scope of this paper, I limited my investigation to two voter behaviors, voting intention and voter turnout, and two emotions – anger and fear.

Employing natural language processing and supervised machine learning techniques, I estimated the levels of negativity in the 2019 UK general election candidates’ Twitter campaigns and the levels of anger and fear in the public discourse surrounding these campaigns expressed on Twitter and in the Daily Mail comments. To do so, I first selected a random sample of 120 UK electoral constituencies (out of 650). I then collected the tweets (N = 53,180) posted by all candidates from these constituencies (N = 449) between November 16, 2019 and December 12, 2019 (the day of the election). I also collected a large sample of replies by the members of the public (N = 305,837) posted directly in response to the candidates’ tweets. Additionally, I gathered comments made by the readers of the Daily Mail news outlet’s (DM) discussing the election candidates or their parties for the same period (N = 63,265).These data were used to train three machine learning models to: estimate the level of negative campaigning in the candidates’ tweets and estimate the level of anger and fear in the Twitter replies and the Daily Mail comments. The resulting estimates were used to (1) model a time series of the relationship between the candidates’ negativity and the public’s emotions (on national, party, and constituency levels), (2) model time series for the relationship between the public’s emotions and a party’s position in the polls (voting intention), and (3) construct a linear regression model between the public’s emotions and voter turnout (on the constituency level). The graph below (Figure 1) presents a time series of  the daily change in values of negativity, anger, fear, and position in the polls for the three major parties. 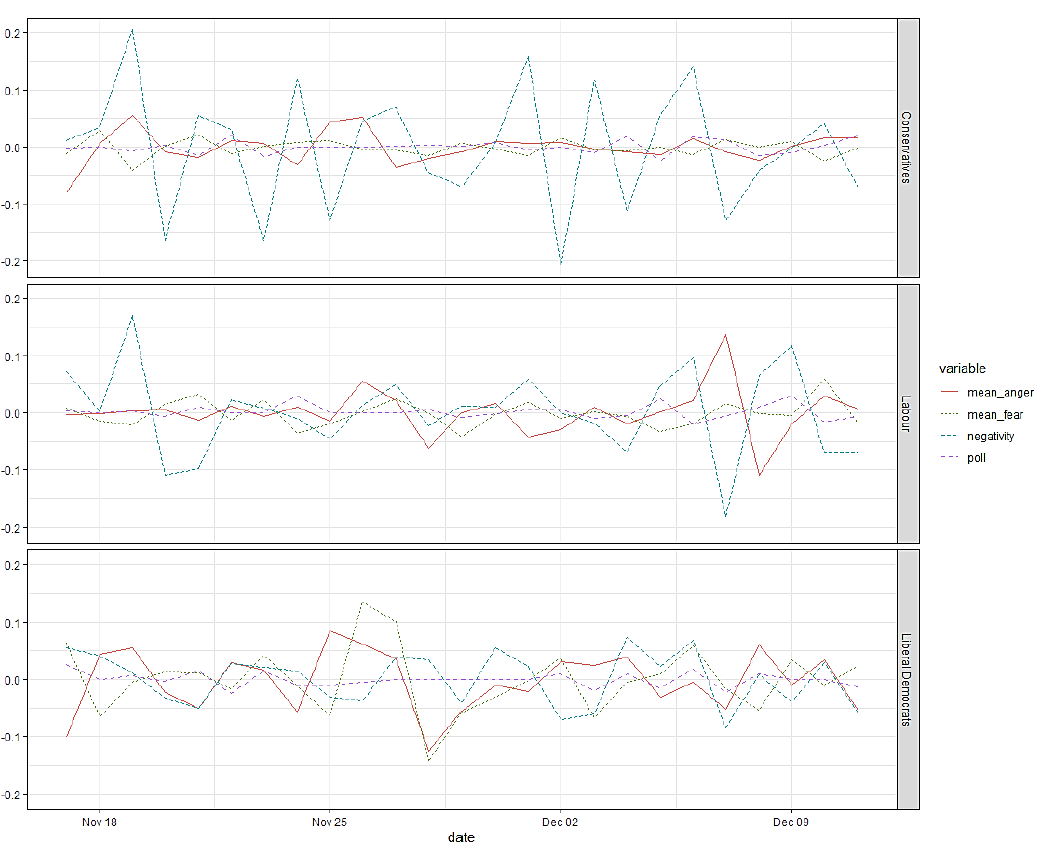 Figure 1. Daily change in values of negativity, anger, fear, and position in the polls for the three major parties.

The results of these analyses provided no definitive evidence for the hypothesized mediating relationship. A clearer pattern emerged when focusing of the two biggest parties – Labour and Conservatives: campaign negativity impacted the levels of fear in the electorate and fear exerted an effect on voting intention. Interestingly however, it seems this relationship can go in opposite ways. Negative campaigning reduced the levels of fear and fear negatively affected voting intention for the Conservatives; while for Labour, negative campaigning had a positive effect on fear and fear positively affected voting intention. Neither negativity nor anger or fear had a significant effect on voter turnout

Overall, in answering the research question of whether the effect of negative campaigning on voter turnout and voting intention is mediated by anger and fear, what can be concluded is: yes, but only for certain parties, only when it comes to voting intention, and only via mediation of fear.