Viral Violence:
The Effects of Police Violence Framing, Group Identity, and Militarization on Public Outrage and Perception of Police 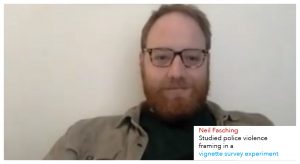 As exemplified by the recent protests and riots following the murder of George Floyd, the framing of police conduct can have a profound impact on the behavior and attitudes of the general public. However, the extent of this impact has yet to be investigated. Using an experiment fielded in the United States, I investigate the degree to which the framing of police violence affects the public’s outrage and perception of the police. Further, I extend this literature by building on intergroup conflict theory (Mackie, Devos, & Smith, 2000; Tajfel, 1981) and by replicating recent work into the effect of police militarization (Mummolo, 2018). And finally, I test how police violence, group identity, and militarization interact in influencing the public’s anger and outrage as well as attitudes towards the police.

Originally, the design of this thesis was digitally innovative. Respondents were to be hooked up to physiological measurement equipment that would track their arousal while watching videos of police conduct, some of which would depict police violence. However, due to constraints caused by COVID-19, this design had to be abandoned, and a more socially-responsible design was adopted that did not require in-person contact. As such, 2x2x2 between-subjects survey experiment was chosen that manipulates militarization (no militarization vs. militarization), group identity (in-group vs. out-group) and violence (no violence vs. violence). There were two different types of stimuli for this experiment: photos and vignettes. The photos were of police officers with two different conditions that differed the level of militarization of the police.

The second manipulation was the vignette briefing describing the events of a nondescript protest. In this vignette, there were two different manipulations. First, the issue that was being protested about was manipulated. The group was either an anti-abortion group or climate change group. The issues of climate change and abortion were chosen as they are highly salient in the US and are top issues of importance for voters (Gallup, 2021; Tyson, 2020). Using respondents’ support for these issues that was asked at the beginning of the survey, it was possible to establish whether this group represents a respondent’s in-group or out-group. Second, the actions undertaken by the police during the protest were also manipulated. In the control condition, the police were non-violent, while in the treatment condition, the police were violence. 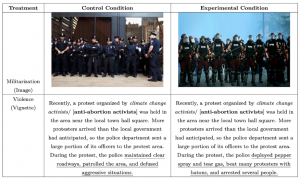 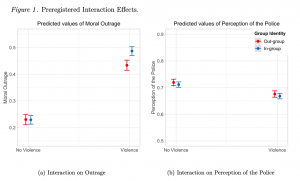 crime but may harm police reputation. Proceedings of the National Academy of