It’s a wrap! In the second semester of of 2020/2021, eight students received funding from the digicomlab to support their digital methods driven theses projects. And what can we say? They all did great!
We are very proud to share the exciting results about research using chatbots, topic networks, neural language models, news recommenders, and many other approaches!

We wish you a great read of the eight blogposts by our most recent awardees and wish you a nice summer!

We are looking forward to the results of these cutting-edge research endeavours:

Personality and susceptibility to political microtargeting: a machine-learning approach based on Twitter text

Age and gender bias in AI-driven recruitment: Modelling the influence of hidden features on the ranking of job candidates

Simply irresistible? Towards a methodological conceptualization of smartphone interruptions

Congratulations to all receivers! 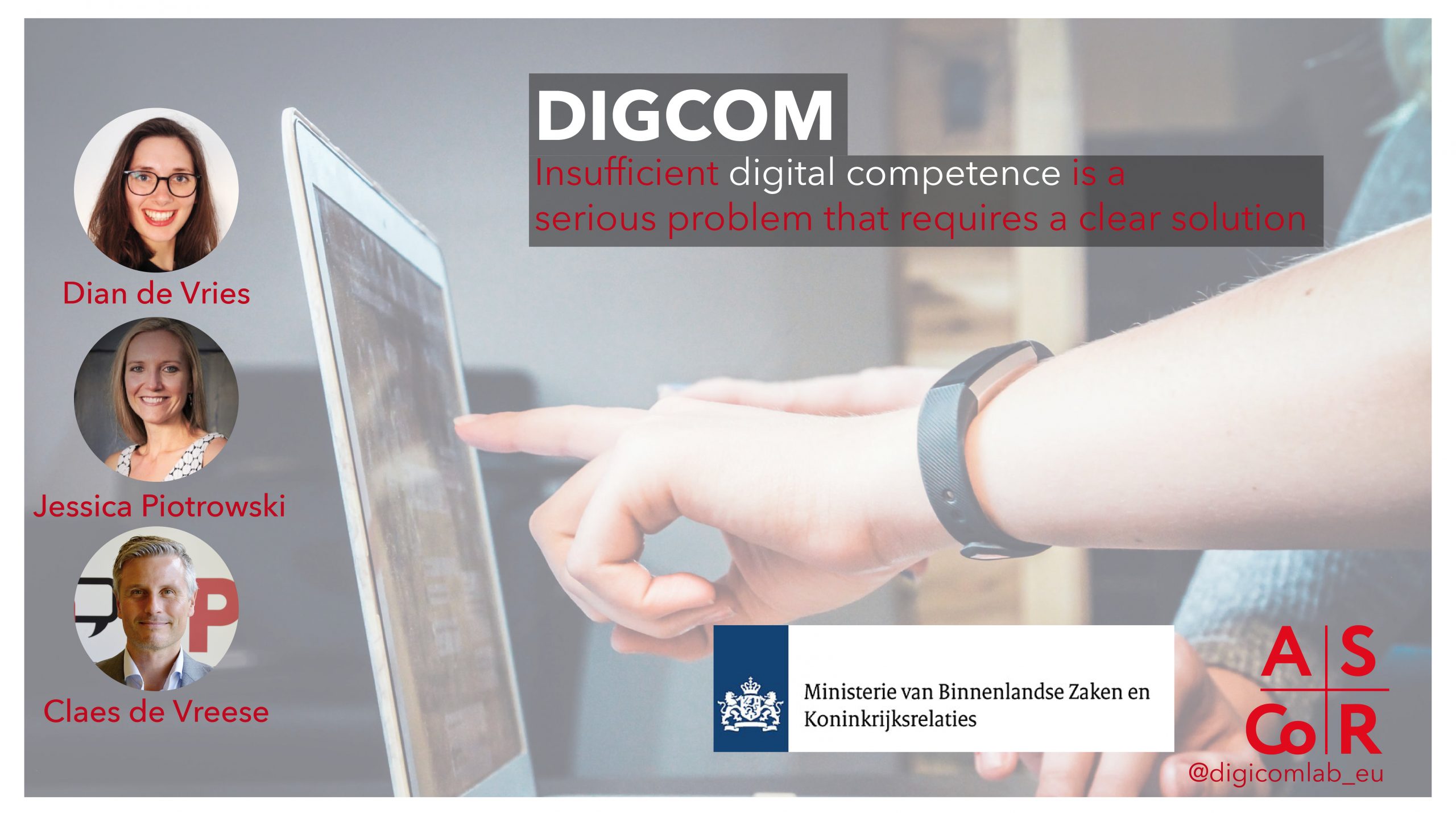 Officially launched in February 2021, Project DIGCOM represents a new collaboration between the Amsterdam School of Communication Research (ASCoR) at the UvA and the Ministerie van Binnenlandse Zaken en Koninkrijksrelaties (minBZK). This is an exciting two-year collaboration designed to assess and support the digital competence of Dutch citizens, representing one of the most robust efforts thus far to understand digital competence across the lifespan.

All Dutch citizens need an adequate level of digital competence in order to fully participate in society. Digital competence can be divided into digital skills and digital awareness. Digital skills play an important role in communication with others and in finding and using information, whether you want to vote, apply for a job, or even date. While many citizens often feel they have these digital skills, this does not necessarily transform into digital awareness. In other words, the knowledge necessary to make informed decisions and protect privacy online. Covid-19 has put a spotlight on this problem. Increasing numbers of people have fallen victim to phishing attempts as they work, shop, and conduct their banking from home. At the same time, although there are digital opportunities available, many do not recognize and make use of them.

It is clear that insufficient digital competence is a serious problem that requires a clear solution. If we hope to ensure that our society is resilient to the times ahead, we must bolster the digital competence of our citizens. But how? To provide adequate support, we first need to know who is most in need of help and which aspects of digital competence are the most pressing pain points. Then, we need to know how we can best support different people to enhance their digital competence. Project DIGCOM is designed to address this by asking the following questions:

The project is unique in that we focus on the entire Dutch population (starting at 10 years of age) and rely on a range of methods including surveys, interviews, and experiments to address the problem at hand. Working closely with MinBZK and other organizations within the Alliantie Digitaal Samenleven, this project has knowledge dissemination and interdisciplinarity built into its core. The team leaders, too, bring with them an interdisciplinary backdrop that together will serve this project well.

The fifth time in a row, the digicom lab provides the opportunity for UvA #commscience Master students to receive funding for a thesis that applies digital methods. With four already successful rounds, we are now looking forward to the exciting ideas of our students on studying theoretically-relevant research questions with the help of digital methods. The call is open: Digicomlab Thesis Funding Grants 2020/21 (s2)

Former research master student Alicia Gilbert has been awarded a top-paper award at the conference of the Media Reception and Effects division of the German Association of Communication (January, 2021). Alicia received this award for a paper based on her master thesis project that was funded by the digicom lab “Online vigilance and goal conflict stress smartphone users out: An in-situ approach to digital stress”. The thesis was supervised by our digicom lab researcher Dr. Susanne Baumgartner. Alicia is currently a PhD candidate at the Communication Science department at the Johannes Gutenberg University in Mainz, Germany. We congratulate Alicia for this great achievement!

The call for the fifth edition of the Digicom Thesis Grant Awards is now online.

For the second time, the Digital Communication Methods Lab as part of the RPA Communication proudly hosts CONVERSATIONS, the International Workshop on Chatbot Research.

More information about the 2020 edition of the workshop can be found here.

Participation is free and open to presenters and non-presenting researchers, students and practitioners

The Research Priority Area Communication and its Digital Communication Methods Lab are happy to announce that four proposals have been selected for the fourth edition of the digicomlab Thesis Funding Grants. These grants provide financial support for theoretically-relevant and digitally innovative (research) master theses written at the University of Amsterdam’s Graduate School of Communication for semester 1 of the 2020-2021 academic year.

Deepfake Negativity: Political attacks, disinformation and the moderating role of personality traits on evaluations of politicians

Deepfakes are artificial intelligence (AI) enabled doctored videos that strongly resemble real videos. While scholars worry that deepfakes represent a new powerful form of disinformation (Dobber et al., 2020), which may enable malicious actors to poison the public debate and interfere with democratic elections (Vaccari & Chadwick, 2020), only two studies to date have explored the credibility and attitudinal impact of political deepfakes. To fill this gap in literature, the present study employed a self-produced deepfake of a politician which was created by a pre-trained deep learning model that utilized 2D expression swapping to modify the lip shape of the politician frame by frame.

Synthesizing literature on online disinformation, negativity bias, and negative campaigning, the study will uncover how are voters’ political attitudes affected by exposure to a deepfake featuring attack politics, which has become a prominent characteristic of contemporary US politics. Using an online experiment among US citizens, the credibility and attitudinal impact of a self-produced deepfake featuring an uncivil character attack sponsored by a Democrat targeting a Republican will be compared to real footage featuring a policy attack of the same sponsor and target. As initial evidence shows that effectiveness of negative campaigning “may be a matter of taste” (Nai & Maier, 2020), the present study uncovers the interaction between negativity and personality traits which may contribute to clarifying the so far inconsistent effects of negative campaigning. In sum, the present study will advance knowledge on the attitudinal impact of negative campaigning and disinformation by employing an AI-powered self-produced political deepfake.

Political knowledge is a central concept in understanding the mechanisms that promote political participation. Citizens with high levels of political knowledge engage in behavior that contributes to the well-functioning of democracies: They hold more stable opinions and are more likely to translate them into consistent voting behavior (Kleinberg & Lau, 2019). While prior research has investigated learning processes in the context of digital media platforms in general (e.g., Bode, 2016; Boukes, 2019), the effects of specific digital information types on political learning are still understudied.

One information type which might be particularly promising in capturing the audience’s attention, and thereby easing political learning processes, are memes. Memes are a unique mix of visual, textual, and humoristic elements, which are prevalent in most peoples’ newsfeeds. Not only are memes humoristic, they are also user-generated; two factors that in the past have been associated with high levels of generated attention among audiences (Boukes, 2019; Ye et al., 2011). But does the sum of these content characteristics indeed result in higher attention levels compared to other visual information types? And does this, in turn, lead to higher levels of political knowledge?

This study attempts to answer these questions by conducting an eye-tracking experiment. The technology provides an important advantage over self-assessed attention measures as it allows for an ecologically more valid measure of visual attention. In an attempt to widen our understanding of political learning processes, this study aims to investigate how new forms of political information presentation shape knowledge in the citizenry.

People have a “negativity bias” when it comes to consuming news content, with individuals putting more weight and attention on negative information (Trussler & Soroka, 2014). Past research found negative news produced much stronger psychophysiological responses than positive news (Soroka & McAdams, 2015). Recently, a form of negative news is spreading not only across main-stream media, but also through social media and interpersonal contact: viral videos and images of police brutality and protest violence.

This study will help understand the individual level explanations why news – and in particular violence – spreads through social media, as well as investigate whether police and protest violence evokes greater outrage than non-politically-charged violence. It will also probe if ideology is crowding out the effect of violence, as it seems likely that outrage is reduced when violence is against their out-group relative to their in-group. Finally, this project will probe the effect of this violence on the political outcomes, such support for the police, as well as social outcomes, such as willingness to share social media and desire to view similar content.

To investigate these outcomes, a large survey experiment will be run. Custom photos and vignettes will be created, with police brutality and protest violence depicted in the experimental conditions and non-political physical altercations or verbal altercations depicted in the control condition. The photos and vignettes will also manipulate group identity, indicating the violence is against a group they support (in-group condition) or against a group they do not support (out-group condition).

Climate change is one of the most pressing environmental crises that our society is facing. With rather ‘prolonged’ and statistical nature (Weber, 2006), its intangible consequences often tend to feel distant for people and not solvable by an individual him/herself (Ahn, Bailenson, & Park, 2014). Recently, the potential of using virtual reality (VR) to perceive distinct environmental problems has become widespread (Ahn, Bailenson, & Park, 2014) with attempts to provoke pro-environmental behavior (Bailey et al. 2015). However, most of the studies focused mainly on vivid visualizations (Markowitz, Laha, Perone, Pea, & Bailenson, 2018), embodiment (Bailey et al. 2015), or stimulating hard to experience situations (Chittaro & Zangrando, 2010), expecting attitudinal or behavioral change.

Such experiences are undoubtedly memorable but could lack information on concrete pro-environmental actions to take. This study will look at VR technology’s persuasive potential by employing persuasive technology (PT) principles through the behavior model for persuasive design (Fogg, 2003; Fogg, 2009). The author will examine how being confronted with a prompt embedded in the VR experience itself could make such VR technology more effective compared to a scenario without a prompt.

Moreover, most of the existing research is focused on the participant’s self-reported attitudes measured right after the experience. However, there is a possibility that these short-term measures reflect a sort of a ‘wow-effect’ that most people tend to experience after experiencing VR. At the same time, these initial effects may quickly wear off in time. Whether the change of attitudes or behavioral intentions has long-lasting effects will be examined by an experimental design focusing on longitudinal data with two measurements: firstly, after the experiences, and then, one month after the study.

Three exciting research projects have been conducted as part of (research) master theses written at the University of Amsterdam’s Graduate School of Communication in semester 2 of the 2019-2020 academic year that received funding through the third edition of the Thesis Funding Grants. Alicia Gilbert, Nicolas Mattis, and Vladislav Petkevic have conducted digitally innovative studies, covering the important topics of smartphone-imputed stress, political news quality, and negative campaign effects. You can read about the results of their studies here.

The next round of the Thesis Funding Grants is going online at the end of August 2020, stay tuned for updates!