Why p not q? An investigation into the affective and behavioral effects of contrastive explanation by a product recommendation chatbot

The need for chatbot transparency and output interpretability arises as a consequence of the increasing complexity of current systems of product recommendation chatbots. This may, in turn, result in users questioning the chatbot and subsequently a low recommendation adherence, especially in the contexts (e.g., healthcare and financial services) where the outputs from the chatbots are significant. Recently, accompanying recommendations with a contrastive explanation that provides justifications for why a recommendation rather than the alternative(s) was made – a novel approach to explainable AI has been proposed to address the need. Incorporating contrastiveness in explanations refers to a comparison in the form of “In contrast to Q, P is more……” where P is the fact, and Q is the contrast case.

As a result, my research aims to address the research question: To what extent do contrastive explanations and anthropomorphic cues influence users’ affective and behavioral responses to a recommendation from a chatbot? 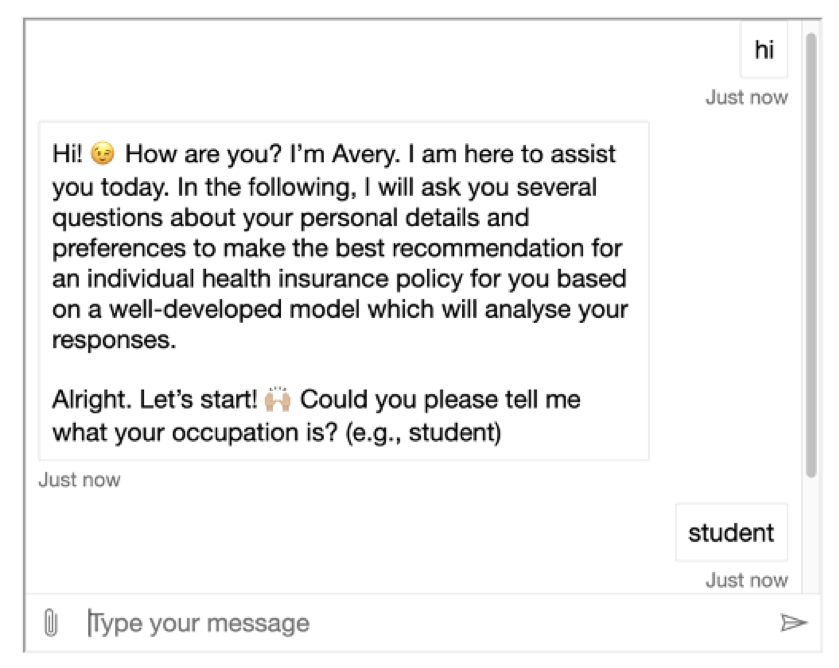 To answer the research question, I conducted a 2 (contrastive versus non-contrastive explanation) x 2 (with versus without andromorphic cues) between-subjects experiment (N = 200). For the experiment, I built a chatbot using Conversational Agent Research Toolkit (CART) designed by Dr. Theo Araujo. I also designed chatbot dialogues specifically for the research with the use of Google DialogFlow. An example of stimulus material is shown in the figure above. In addition, I created a questionnaire using Qualtircs. Using the grant from digicomlab, I recruited 200 participants from an online survey platform – Prolific. Participants were aged between 18 and 35 and living in the United Kingdom (UK). After receiving greetings from participants, the chatbot would be activated, introduce itself to the participants, ask the participants about their personal information (gender and age), cigarette use, and personal preferences for a new individual health insurance policy.