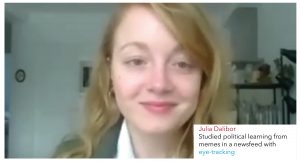 Political knowledge is an important prerequisite for an informed and actively engaged citizenry (Kleinberg & Lau, 2019). With almost 60% of the world’s population being active on social media (Digital 2020 Global Overview Report, 2020), Social Networking Sites (SNS) such as Facebook or Instagram are gaining importance as sources of daily information, especially among younger generations (Reuters Institute for the Study of Journalism, 2019). It, therefore, becomes increasingly important to understand whether and how learning processes can take place on SNSs. Scholars have found mixed results regarding the learning effects of general social media use (Bode, 2016; Boukes, 2019; Lee & Xenos, 2019). However, to date, only little is known about particular content types and their ability to affect learning.

To close this research gap, this study aimed to investigate differences in learning effects between two distinct visual information content types (VICTs): memes and infographics. Due to their humorous qualities and the fact that they are user-generated, memes were hypothesized to result in higher rates of perceived issue importance and greater knowledge gains than infographics.

Memes and infographics did not differ in their ability to affect perceived issue importance and political knowledge. Even though no differences in effects between both post types were found, a significant direct effect of visual attention on information recognition was established. This suggests that the longer an audience spends observing a post, the more likely it is to memorize the displayed information. This underlines the importance of attention in forming political knowledge.

Another finding is related to the attention scores drawn from memes and infographics in comparison to other posts in the displayed newsfeed. Interestingly, both VICTs yielded almost identical visual attention scores. On average, 13.74 seconds were spent observing the meme and 14.28 seconds were spent observing the infographic. For a visualization of participant’s eye movements see Figure 3. Even though only minor differences in attention scores between the two VICTs were found, both outdid those of other posts in terms of captured attention by 6.09 and 6.63 seconds, respectively. These findings underline the ability of visual content types to capture the audience’s attention in stronger ways than other post types.

Based on these findings, it can be concluded that the characteristics of memes and infographics might be too similar to showcase differences in knowledge gains. However, visual posts remain promising in both capturing the audience’s attention and in affecting learning. Future research is advised to further investigate how certain post characteristics shape the audience’s attention levels. Gaining insights into attention-capturing characteristics could, in turn, broaden our understanding of how political knowledge develops and how it can be fostered in digital media environments.

Reuters Institute for the Study of Journalism. (2019). Digital news report 2019. Retrieved from https://www.digitalnewsreport.org/survey/2019/how-younger-generations-consume-news-differently/