Today’s information ecosystem of push notifications and constant news availability makes it nearly impossible to escape negativity and threats in everyday life, leaving many people feeling powerless and overloaded (Tsakiris, 2020). Thus, it is unsurprising that a significant share of people (temporarily) avoids the news to preserve their mental wellbeing (Skovsgaard & Andersen, 2020). At the same time, however, some regular news users seem to handle the recurring negativity better.

With this study, I investigated an explanation for these different patterns by turning to emotion regulation as one possible way to understand how outcomes of news use can differ across individuals. Emotion regulation is the process of modifying emotional experiences and expressions (Gross, 2008). Regulating one’s emotions can be a powerful tool to reduce negative affect and arousal elicited through negativity and to uphold a healthy level of mental wellbeing (Bebko et al., 2011). Importantly, though, other strategies, such as the suppression of emotions, can also backfire and make people feel worse (Guassi Moreira et al., 2021).

This study aimed to find out whether the use of specific emotion regulation strategies in response to negative news is associated with wellbeing, perceived arousal, negative valence, and news use frequency.

I focused on the following strategies:

Table 1 below displays the directions of expected relationships and highlights which of the hypotheses could be supported. 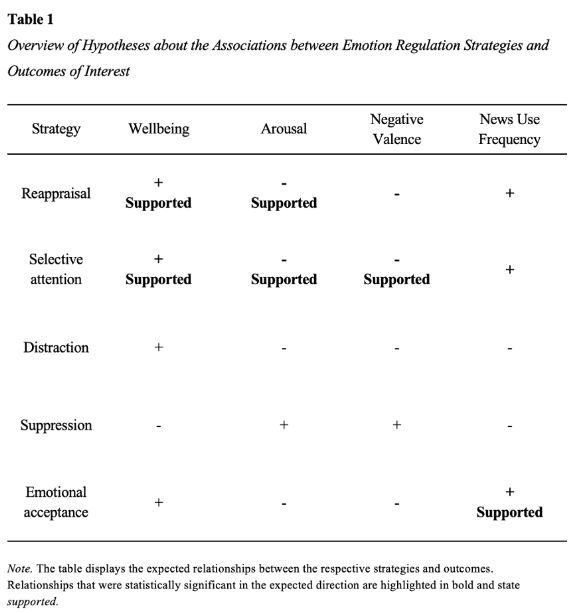 The study applied a quasi-experience sampling method (ESM) design over

the course of eight days using the research app Expiwell. A total of 120 participants were asked to respond to two surveys per day; one in the morning and one in the evening. The surveys documented the participants’ news seeking behavior as well as their emotions, wellbeing, and emotion regulation strategies in response to exposure to negative news. The repeated measurements went beyond random snapshots of the participants’ lives and allowed for analyses not only between participants but also to capture naturally occurring intra-individual variation. Moreover, surveying respondents within short time frames after news use ensured that participants did not have to rely on their long-term memory.

Moreover, the use of selective attention to negative news was associated with decreased perceived physical arousal and negative valence, as well as increased mental wellbeing. Thus, some people may be capable of focusing on the information of news without paying attention to its negative emotional impact, and hence may not be processing the negative emotional implications behind the news. These results are interesting when interpreted in light of prior research, which indicates that there are substantial inter-individual variances when it comes to a negativity bias (Soroka et al., 2019). Lastly, the study found that those who tend to be more accepting of their emotions were also those who tend to consume the news most often.

In line with the assumptions of the differential susceptibility to media effects model, these findings offer some evidence that there exists a stage between media use and media response that can successfully alter the emotional and excitative responses to media products, and that may also (positively) impact mental wellbeing. Future research in the context of news use will benefit from further investigating how emotion regulation may help individuals cope with news negativity better.