Implicit Citation Dynamics in the Current Academic Discourse on Opinion and Attitude Change by Media Effects.

A bibliometric Analysis of Communication Journals as Disciplinary Self-Reflection.

The aim of the study is to conduct a reflective bibliometric analysis of the current research community on opinion and attitude change in communication science. Its objective is to position the academic discourse on the media’s influential capabilities in relation to previous theoretical stages of the field. Therefore, the study identifies the most influential scholars from the last five years, their associated topics and key findings, as well as the structure and general research agenda of this research network.

This extends and fills a gap of previous literature by providing a critical reflection on the media effect tradition in a changed media environment that is defined through new digital affordances. Further significance resides in the reflective nature as these works build the foundation for future research on this subject. Consequently, this analysis will provide insights into the academic agenda setting and knowledge creation as well as intellectual structure of the field.

The study implements a mixed methods approach. In a first instance, a citation network analysis is conducted to uncover structures. The identified most influential scholars’ most cited articles are manually coded to classify their academic research. In addition to the computation of a LDA topic model to identify associated topics. 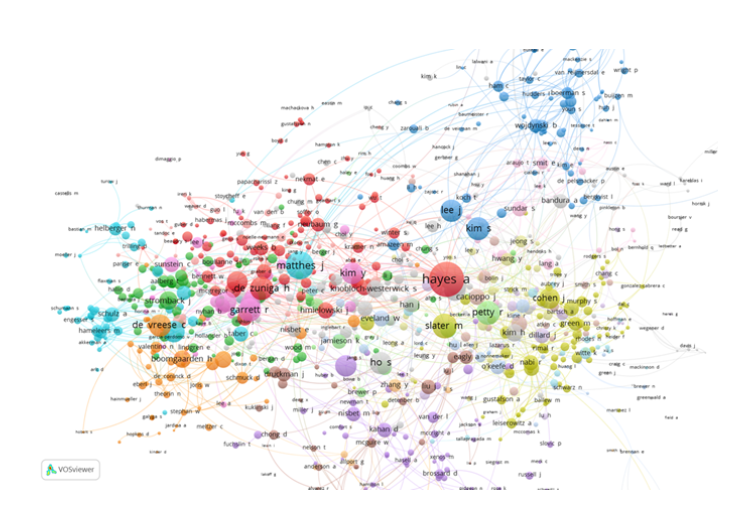 The results picture a topically broad, highly fragmented research community that is defined through low values of interaction as well as disconnected topically fields of research, which implies a lack of knowledge integration within the field (absence of (dis)agreement). Simultaneously, the centrality measures show that the most influential scholar (Hayes) provides a methodological framework for the analysis of cognitive mechanisms (mediation). Significantly less influential scholars are cited for cognitive media theories (Social Learning Theory, Elaboration Likelihood Model, Reinforcing Spiral Model) as well as significant case studies of opinion and attitude change.

Theoretically the community draws on diverging perspectives that aim to synthesise previous media effects theories through the re-evaluation and adaptation to a new media environment that is understood by the community as personally mediated (interactive production of personalised information), alongside a shift towards echo chambers (selective exposure) and reinforcing media contents which suggest a long-term impact on opinion and attitudes. While emphasizing the empowerment of the audience through their cognitive capacities and social identities.

The LDA topic model identified three manually classified dimensions – namely media, civil, and social aspects. The media perspective accounts for the constructed information through the source, digital affordances, persuasion techniques that are implemented to change opinions, alongside the measurement of media exposure related variables. The analysed civil topics are associated with (political) engagement. The latter surfaces in the tendency to express opinions regarding social issues, the support for policies, and the trust that the public holds towards mediated personas. When related to the analysis of media effects, social aspects include primarily characteristics of the receiver. Hereunder count their cognitive capabilities, their personality traits, their social identity, and beliefs as perceived by themselves and their environment. 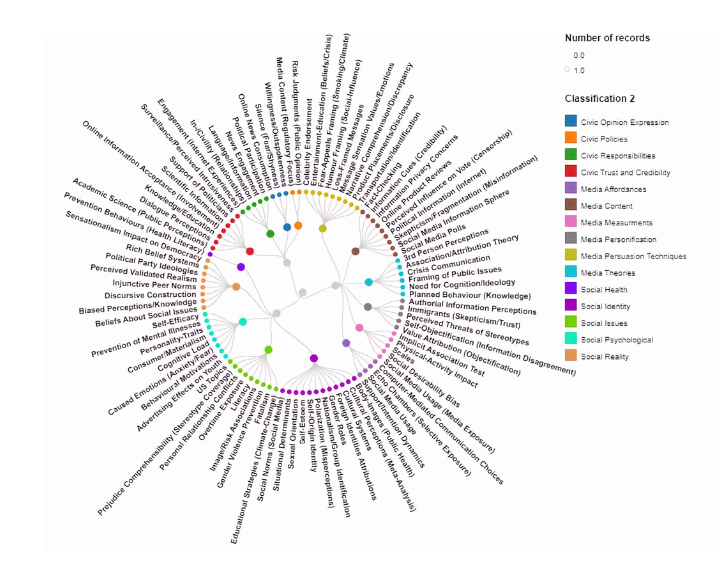 The dendrogram visualisation underneath depicts the manual classifications and individual topics.