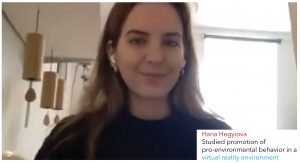 Plastic pollution represents one of the greatest environmental threats. Plastic particles, also known as microplastics, have been found in our food, drinking water, soil, and, recently, even in a placenta of an unborn baby (Ragusa et al., 2021). However, due to its gradual piling up in the ecosystem and the fact that most of it ends up in the ocean, one might find the link between their daily plastic consumption and its negative impact on the Earth too abstract. Luckily, virtual reality (VR) and its immersive virtual environments (IVEs) have been found successful in making the future consequences more tangible, enabling individuals to experience the harmful effects of environmental issues here and now (Anh et al., 2014). Despite the promising outcomes of virtual environments on behavior change, academics are still calling for a more precise framework within this field. The overall goal of this study was to provide a systematic understanding how VR experiences can be designed effectively, as well as to determine if a learning prompt embedded within a virtual experience predicts self-efficacy, behavioral intentions, and behavior. 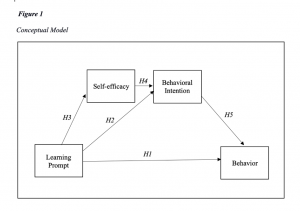 The study employed an experimental between-subjects design with two groups (N = 121) engaging with an IVE. Figure 2 shows the laboratory setup and equipment used in this study. The technical setup consisted of Oculus Quest (HMD) with two controllers. This headset was chosen to deliver participants an immersive and undisturbed experience because of its “all-in-one VR experience” without a laptop, additional wires, or external sensors required. 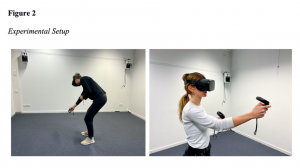 A recently created VR experience called Project N.O.M.P (standing for “No More Plastic”) was used for this study. The experience started in a wide room and employed a first-person perspective (Figure 3, A). A female robotic voice introduced herself as NOMP, an artificial intelligence (AI) that lived in a cloud but could talk through a machine standing in the room (Figure 3, B). To show the user how fascinating the machine could be, the AI offered to use it as a time machine and took the participant one week into the past, under the pretext to buy groceries upfront for the present moment. Time travel turned out well, and the AI invited the participant to do their grocery shopping (Figure 3, C).

In the next scene, the participant was surrounded by frequent shopping items mostly in plastic packaging (Figure 3, D). After choosing 10 items and placing them in the basket, the participant could step again to the time machine and go back to the present time. As showed in Figure 3 (F), this time, the time machine showed the year 2021 instead of 2020, and participants stepped outside the machine into a pile of plastics. (Figure 3, G). NOMP explained to them that the time machine did not work correctly and that what they could see was the consequence of their plastic consumption in one year, which could only be avoided by buying less plastic. After this point, in the control condition, the user was told that it was too late. The user was then asked to use the time machine one last time and return to the present time.

The independent variable ‘learning prompt’ was added to the experience as an additional learning sequence. After being told that the situation can still be fixed, participants in experimental group were invited to experience (prompt) at first hand the process of decreasing of plastic consumption through a converting machine, which allowed participants to interactively convert plastic into more environmentally friendly packaging.

Through the machine, participants converted five of the items they bought in the previous shopping scene alternative (e.g., cucumber in plastic wrapping and cucumber without plastic packaging, see Figure 3, H). While converting each item, the plastic garbage in the background shrunk, giving the participant signal that buying products in more environmentally friendly packaging could help reduce the plastic waste. After converting all the five products and cleaning up the plastic pollution, the participants went back to the present time. The closing scene was identical for both groups.

The learning sequence was found to be an effective design element to consider when creating a virtual experience on plastic consumption. Prompt followed by a learning sequence embedded within the VR experience significantly boosted self-efficacy, and the relationship between learning prompt and intentions to consume less plastic was fully mediated through increased plastic-related self-efficacy, thus fully explained by this variable.

Secondly, the manipulation effects on self-efficacy and behavioral intentions were still significant one week after the experiment. Such outcomes fill the need for longitudinal effects (Bailey et al., 2014) and are in line with the few studies on IVEs and environmental messages (Ahn et al., 2014; Ahn et al., 2016) that, similarly, found remaining effects. In contrast, the two abovementioned studies compared VR with more traditional media such as print and video (Anh et al., 2014) or video with haptic devices (Anh et al., 2016). It can thus be suggested that this study is one of the first ones to find longitudinal results while solely manipulating the virtual environment.

The current study is one of the first attempts to extend the research of immersive virtual environments within the framework of persuasive technology and the relevancy of self-efficacy for behavioral intentions. Scholars should consider increasing self-efficacy correspondingly within different PEB topics (e.g., energy-saving and nature preservation) to see if there is a potential to translate such effect also into behavior change. Further research could also extend the knowledge of this design element and investigate the combination of increased self-efficacy with different micro-elements of VR design, such as embodiment, high interactivity, and vivid visualization.